Hello, let me introduce myself, I am Sebastiaan. I am responsible for everything to do with the Office Roulette. You will mainly see my name on Friday afternoon at 4 o'clock, when the weekly statistics e-mail is sent. From the very first version I have been improving this service and everything around it.

The page below describes the history of Office Roulette. For the sake of convenience, I have done everything in the I-form.

For questions and comments you can always reach me via sebastiaan@officeroulette.com! Even if you have nice ideas for the site, app and/or plug-in!

At the start of 2015, everything started with the Beer Roulette website. Together with a group of entrepreneurs we were at the top of a multi-floor building and had to go downstairs to get coffee. After building a prototype webapp in a few days, more and more ideas came up to make it less susceptible to fraud (things like saying the names aloud).

The idea of the Bier Roulette (Dutch for Beer) was that we would use the website ourselves in the office (for coffee) and that we would focus primarily on students. (Groningen is a student city after all)

After going live, we were quickly picked up by local (Groningen, the Netherlands) media such as Sikkom (A Groningen news platform).

The first variant of the Beer Roulette ( bierroulette.nl ) went live on 22 May 2015.

The retro design of the first dutch Bier Roulette, renamed to 'Bier Roulette Classic' is almost the same webapp as it was in 2015. You can find it here .

Screenshot of the Classic Beer Roulette

In September 2015 I came up with the idea to build a Chrome extension that you could use to send requests for coffee to colleagues.

In many evening hours after work the first (semi-working) Chrome extension was created, the first dutch test version of which was released on October 21, 2015. The extension could not actually keep the name Bier (Beer) Roulette, since it was going to be used primarily in the office. That's why I came up with the name Kantoor Roulette (Office Roulette in dutch). 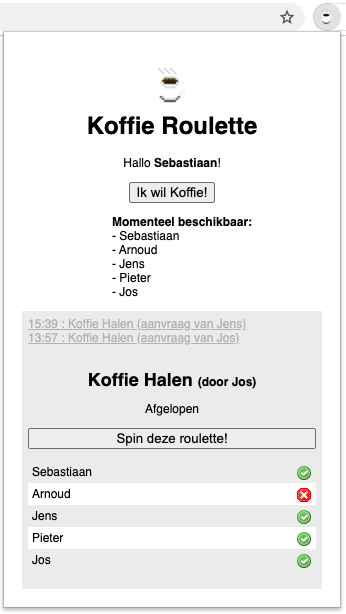 Version v0.9, not really a fancy design or something ..
September 2015

In 2016, the Office Roulette extension was sporadically updated with new small functionalities. WebSockets support was also installed in February of that year. This made it possible to have coffee requests (real-time) appear on the screens of colleagues, thereby drastically reducing data consumption, among other things.

Mid 2016 a copy of the functionality of Beer Roulette was made and converted into the Kantoor Roulette (dutch Office Roulette) web app. This web app got a more businesslike look and some functionality was rewritten. This first version of the WebApp was designed by Arnoud Evenhuis and programmed, coded and animated by me.

In this version, all users could watch the wheel during a roulette. The fact was that after a request the wheel had to be turned manually on a special URL on the site of Office Roulette.

This was not really ideal, because every participant saw the special url after the request, which often caused problems, such as accidentally running the same roulette on two computers.

New members trickled in very slowly, but we didn't actually do marketing. It remained a side project that got its time especially in the evening hours. The number of members had meanwhile risen organically to (no less than 😅) 50 members. 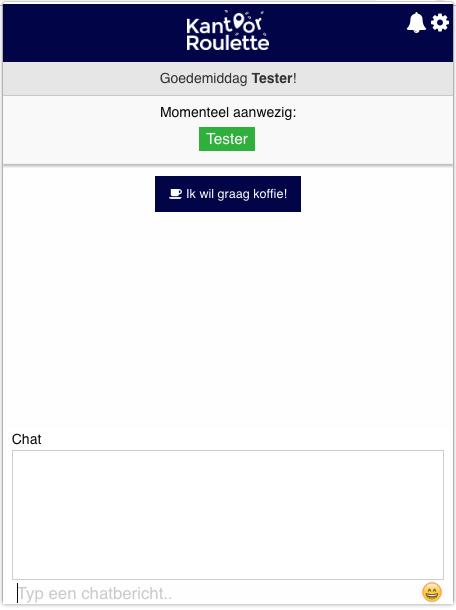 Insiders: Small developments and hidden features such as the Gulden Gamble ..

In the time that followed version 1.0, there were mainly minor updates and a number of functions that were only available at our own office. For example, in version 1.0.1, the 'Gulden Gamble' was built in for our own office, with this function anyone who had the crypto coin Gulden could deposit it at Office Roulette. When participating in a roulette, you then bet 0.5 guilders which was then credited to the loser of the roulette. Bringing coffee was therefore more interesting instead of annoying.

However, this feature has never been available to the general public, due to the dutch gambling rules. Yet we had a lot of humor in the office. This function has been removed again in version 2.0, because the code of the server has been rewritten.

From the beginning of 2018, I was mainly focused on version 2.0 of the extension. Again until the first release of version 2.0, this was only possible in the evening hours or during weekends due to other work activities. It had no priority and the version that was live from the extension did its job just fine.

This gave version 2.0 that was planned for the end of 2018 a huge boost in development.

The biggest update so far, version v2.0, was rolled out to all users at the end of September. Among other things, this update brought the self-spinning wheel! In addition, the entire extension was rebuilt and it all worked just a bit better. Since then a change log has been kept in the extension, so that with new versions it is also clear what has actually changed. You can find this in the menu of the extension under the star-icon

The new logo was delivered in mid-November and implemented on December 7. The new logo was designed by Suzanne Nieuman from Phanatique . The idea for the animation in the logo was created in collaboration with Foleor Digital . After which I finally animated this in CSS (with transitions).

In recent years, the Office Roulette website was actually purely an App on the web. There was nowhere information about what it actually was, where it came from, who is the developer. That is why I asked Harco Janssen (Paperblue ) to set up a design for a informative website. This website design was delivered at the end of December 2018, after which I could front-end it to the site that you see today.

The Plugin is multilingual!

The version 2.0.4.0 of the extension brings the entire extension in English as an update! In the versions that follow, English language errors are slowly being solved and new translations are being added, but since this version the extension can be used perfectly for non-Dutch-speaking office colleagues!

The main focus of the January was the new website. This month, I converted the design that Harco made earlier into a working website with some nice animations.

With the launch of the site, Office Roulette Plus accounts have also been introduced with new functionalities. The old functionalities are (and will always be) free.

New name for Pro: Plus!

Plus accounts have been used on the site since mid-December. This naming is a bit more friendly and fits more in what you get. The functionality has not changed, but will be expanded further.